Ever since Tiny Tadpole was born practically, he has been in the wrap.  First it was the Moby, then the woven wrap, which was a gift from a dear friend.  This spring we had the joy and pleasure of taking a coastal anniversary roadtrip for Pape Frog and my 10th anniversary.  We headed down from Maine to the Washington D.C. area and then down to Georgia, where Papa Frog hatched, and where his family still lives.  In DC we stayed with friends (the same friends who bought our favorite woven).  I was going back through the pictures, sorting out so I could post a couple of blog posts about our trip and I came across this lovely picture of Tiny Tadpole in the light blue woven.  This is significant, because it is a picture of the last time he was in it and the last time anyone even will be.

You see, during our Coastal Anniversary Roadtrip, our family suffered a casualty.  At the hands of the sharp legged kitchen chair, our light blue woven wrap met its end.  Accidentally dropped on the floor and then maserated by the chair leg, it was no longer safe to use.  This Mama Frog has to be honest….I cried.  We had been super sad since we got home without our wrap, and I was just waiting until Papa Frog’s work schedule picked up (darn snow 180″ in a couple of months is ridiculous!) so I could replace it.  Then this happened- I checked the mail and there was a package from a WAHM seller called Nap Wrap Fairy.  Inside was a gorgeous navy colored woven (and when I say navy I mean the Crayola navy not the boring old blue).  Tiny Tadpole recognized it immediately and tried to wrap himself.  This Mama Frog obliged and up he went.  This is his face about 15 seconds before he was sound asleep. 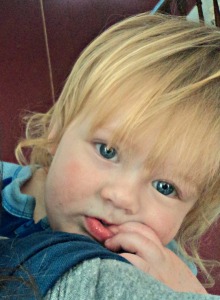 It reminds me that sometimes out of our sadness comes unexpected new blessings.  I am so thankful for good friends, and happy fluffy mail, and coastal anniversary roadtrips, and unexpected things, and this sweet Tiny tadpole who reminds me what is truly important.

One thought on “Casualties of the Coastal Anniversary Roadtrip”