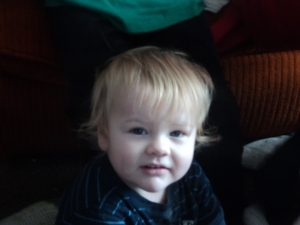 Yesterday was grocery shopping day.  Imagine if you will- taking 6 froglets grocery shopping, during which you purchase enough food to feed 8 people 3 meals a day for one calendar month.  Wait, first imagine going by yourself and undertaking this monumentous task.  Okay are you cringing a little yet?  Now add in some mostly well-behaved froglets.  Are you still with me?  Now imagine that during this trip, one of your froglets was a toddler and had a massive “poop incident”.  You know, the kind that cause you to use air quotes when you talk?  Let me tell you a secret little something- it’s not that bad.  Honestly, it’s not.  Even when it is.

So yesterday morning we got up bright and early, and armed with our lists and meal plan for the month, we headed out.  I always feel a bit like an old school explorer venturing into uncharted territory, because honestly, when you take that many people out to do something, there is a certain unknown variable to the whole thing.  On the way, Jelly Bean read from her primer and Lizard Breath filled me in on a new Minecraft mod she saw on Youtube.  The little froglets snatched a nap and Tiny Tadpole had a snack of bananas.  We arrived at our first and main destination in high spirits, aside from Ray Bear who had a touch of car sickness (mostly I think in protest of actually having to do math in the car).

We walked through produce and the deli, then moved to meat.  it was here that my little Froglets lost a touch of their patience.  I had to have some meat specially cut as well, which did not help matters.  By the time we got to the pasta row they were on edge.  That’s when the incident I like to call “The Big Poop” began.  It was accompanied by several vocal insistences that “someone farted”.  This my friends is why we shop early.  It soon became clear that Tiny had pooped.  One of my big froglets volunteered to get the diaper bag.

It was at this point I realized, that in spite of the fact that we have already had snow, and have broken out the winter coats, the froglet who packed the diaper bag for me was locked into a state of perpetual summer.  Tiny Tadpole had an extra change of clothes, but they involved a water shirt and a pair of shorts.  Luckily, I had thrown in an extra diaper cover!  Also in the diaper bag was my oil kit.  A little dab of P and C later and everyone was taking some deep calm breaths, but mostly through their mouths because Tiny Tadpole was STILL pooping.  About the time I would think he was done, he would poop again.  Luckily, by this time, the finger pointing regarding farts had mostly stopped.

We made our way to the bathrooms.  Of course, by this time everyone needed to use the bathroom.  Let me tell you something about shopping early.  There are two types of early shoppers.  People like me, with froglets who like to fly under the radar and the elderly.  Sometimes when we shop, we seem to see those kindly souls who smile and cluck over the froglets, recounting tales from their own childhood, when large families were the norm.  Yesterday, I am almost positive the only people shopping were of the type that didn’t have children and didn’t particularly like them either.

Those same people were also apparently all in need of the restroom.  This meant we had to wait.  Which prompted the froglets to dramatically dance around holding their crotches (not all- I exaggerate it was mostly Scoot and The Boy) and to exclaim loudly that they needed to “go now”.  Mind you, I have a Tiny at this point who is literally making my eyes water he smells so awful.  At one point, Scoot may or may not have actually knocked on the bathroom door before I could stop her and said, “I need to use the bathroom.  Please hurry.”

Eventually, the elderly evacuated the restroom and thirty minutes later the froglets had all pottied, washed their hands and I had a toxic diaper locked in a plastic bag to be dealt with upon return home (the bad part of cloth diapering- you can’t just throw those diapers away, especially when they are custom made with your business logo on them).  And we made it to the checkout.

Is it any wonder that I overspent just a tad?  I came out of the grocery store feeling shell-shocked.  I was frantically doing the math to figure out where the overexpendature lay (come to find out I was overcharged, it really wasn’t my fault- but I didn’t realize that until later).  Finally got the froglets loaded up, packed in the groceries and made my last stop.  I had to hit Wal-Mart for a ball of yarn and I had promised the froglets we would get something to eat on the way home.  Overspending meant this would be a pain.  I left my cash at home and only had 3 cards.  Now, we have a bank card, a prepaid card and a Paypal card.  None of them ever really retain a lasting balance.  But I was down to the dedges of all three.  I had enough however to cover what I needed to buy still.  At this point, if it were just me, I would have thrown in the towel and just come home.  But the yarn was for an order and the froglets were starving.

So we got in, picked up picnic on the go lunch stuff (aka a deli sandwich and some chips and drinks for the road) and my yarn.  Headed to the shortest line.  Now, here is my advice to you.  NEVER go to the shortest line.  If you are somewhere like Wal-Mart and one line is really short- AVOID IT!  I did not listen to this cardinal piece of advice.  The cashier was a gentleman (and I use the term loosely) in his 50s I would say, with a scowl on his face.  He rang up my purchases and I explained to him that I needed to use a certain amount off two different cards.  He sighed loudly and muttered that he wasn’t sure he could do that.

After what seemed like an eternity and which was probably closer to 5 minutes, during which he ran the cards through incorrectly trying to put the full amount on both cards (neither of which had enough to cover the full balance) and during which he loudly announced “Insufficient funds” each time the card was denied, I was cringing and embarassed beyond belief.  I just wanted to get out of there.  Finally he got it to work and we were able to escape.  During this escapade, the froglets had been playing together, giggling and while not being silent, not being noisy either.

I was however feeling the sting of poor budgeting and the icky stomach feeling of imaging everyone is talking about how broke you are.  With a lot of froglets, I am particularly sensitive to this, as one of the common things I have heard with each new froglet was how we couldn’t afford to have them.  Now, we are by no means wealthy, but we do get by.  And everyone has those times when they are pinching pennies and making them squeal.  Anyway, I was caught up in my own bad feelings, and said to Ray Bear, “It’s embarassing enough for me when I have problems when I am paying for things, but you guys were acting crazy.”  This was both unfair and untrue and I both glad to say and ashamed to say that my 8 year old totally called me on it.

“We weren’t being naughty.  We were just playing,” she said to me.  And you know what- she was right.  Those froglets were and are awesome.  They behaved so well through all of the mess yesterday and I let all the little things add up until I wanted to be frustrated with them for something that was not their fault.  They are just kids.  They act like kids.  They are supposed to.  And that rude cashier doesn’t matter.  Not to me.  What matters are the froglets who call me mama.  That I can be a good example to them.  So I made myself an example and apologized and challenged them to a skipping contest to the car.  Because having a lot of kids is great- it really is.  No matter how many people have expressed disbelief over our family size, and how many people have told us we need to find a hobby, or watch more TV. No matter how many times we have been asked if we know how “that keeps happening” and if we know what birth control is.  Even on a bad day, when things are going wonky, having these six froglets makes life worth doing. 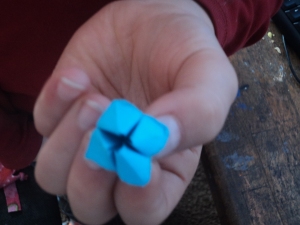