Tiny Tadpole is a healthy guy.  Literally, a healthy guy.  He gives his poor Mama Frog fits, as he is walking already at just one, climbes the staircase, climbs the stepstool, etc etc.  This is all normal boy Frog behavior.  But Tiny Tadpole has never been sick, until this past weekend.  The Froglets caught a respiratory bug.  Some Thieves oil and some RC oil and they were fine as paint two days later.  But apparently, Tiny Tadpole, who has never been sick, caught their germs, as Tadpole are wont to do.  And that Tiny Tadpole, he takes feeling bad rather personally.  We had a rough night two night ago with him.  Poor little mite ran a fever and since it’s been several years since I have needed any type of baby fever reducer we of course had none.  And since we live on the Pond, and everyone closes their lily pads up by 9:00, Tiny Tadpole was miserable all night long.  Well, I say all night, because it felt like that night lasted a week.  When he would wake up, he would scream and yell.  He would toss and turn and want to be cuddled without being touched.  Tiny Tadpole is a contradiction quite often.  The only thing I found that helped him, and allowed either of us to snatch some sleep was the run the diffuser.  A wise mama friend told me to try Lavender and Roman Chamomile (or German Chamomile) in the diffuser to help relax his coughing and help him get some rest.  Let me say, I would run the diffuser and he would doze off, when the diffuser would stop (it has an automatic turn off), he would wake up screaming.  Poor Tiny Tadpole.  He is on the mend now- not only was Papa Frog at the shop when they opened to get him some fever reducder, but this Mama Frog also has a few more tricks up her sleeve now.  But Tiny wanted me to share his diffuser blend for all the Tiny Tadpoles in your life who could use some help on those icky sicky nights. 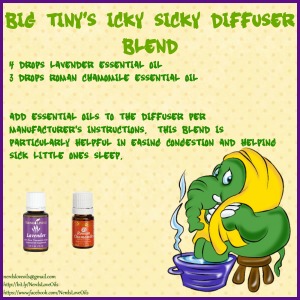 Luckily, we nurse, since I don’t think flies would provide the same comfort as snuggles and Mama Frog milk.